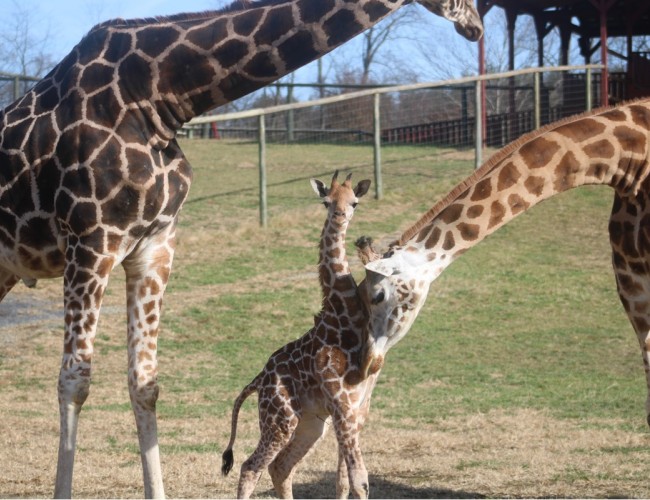 Virginia Safari Park is pleased to announce the recent birth of a female reticulated giraffe named Savannah. The newborn calf is the second giraffe born this year to the zoo, bringing the total number of giraffes at the park to eight.

Following a 14-month gestation period, Savannah was born on November 8 to mom, Sandy, and dad, Geronimo. Savannah is now thriving at the park and her recent introduction to the other giraffes went exceedingly well. “Savannah’s arrival is very exciting for us,” said Sarah Friedel, Director of Virginia Safari Park. “Her birth is significant, and we are so proud to play an active role in efforts to ensure future generations of reticulated giraffes survive, as they are currently suffering an alarming population decline.”

The tallest mammal on land, giraffes are one of Africa’s most iconic species. The coat of the reticulated giraffe is the most distinctive of the nine subspecies of giraffe - consisting of large, polygonal, chestnut brown spots, separated by a network of bright white lines. These spots rarely extend below the knee.

Giraffes mate year-round, peaking at the rainy season. The calf comes into the world front feet and head first, dropping up to six feet to land on the ground. Calves are 6 feet tall and weigh between 100 to 150 pounds at birth, and they can stand up and walk within an hour.

Giraffes once occupied much of the African continent several decades ago, but today face threats to survival including habitat loss, illegal hunting, and poaching, human encroachment, and disease.

Savannah is expected to make her debut in the spring when the park reopens for the 2022 season.